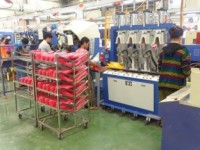 Sportswear retailer Adidas Group has begun sourcing from Myanmar following two years of “extensive stakeholder engagement” in the country. The company announced the strategy as it published its updated global factory list, which details all the factories that manufacture products for Adidas.

Bill Anderson, head of social and environmental affairs, Asia Pacific region, Adidas Group, said: “Myanmar is a newly developing country, one which is undergoing positive political change, but also one that has a legacy of human rights abuses including the use of forced labour, child labour and the like.

“If we want to do business in Myanmar, we should do more in our assurance process. We need to set the bar higher,” he added.

Adidas said it has developed specific guidance for its suppliers on land acquisition and development of industrial sites. The retailer is currently working with the International Labour Organization’s office in Yangon and the Myanmar Garment Manufacturers Association on ways to lift the overall standards in the clothing sector.

For the full story, see the March 2015 edition of Textiles South East Asia. Not a subscriber? Sign up HERE