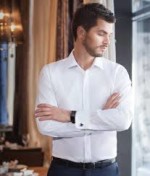 In particular, the company commissioned a Gerber automated spreader and a Veith needle spreading table, the sewing equipment was renewed, and the company bought a fabric measuring and inspecting machine. Some of the projects were implemented outside the modernisation programme, said Zhuk.

For the full story, see the April 2014 edition of Textiles Eastern Europe. Not a subscriber? Sign up HERE