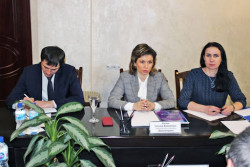 Bellegprom, Belarus’ flagship textile and light industry producer, has formulated a new strategy for development and an action plan as a response to sanctions imposed on the country by the European Commission.

According to Tatiana Lugina, head of Bellegprom, although there are currently no direct bans from European partners on co-operation with the company, such a possibility is being considered by some of them.

For the full story, see the August 2021 edition of Textiles Eastern Europe.