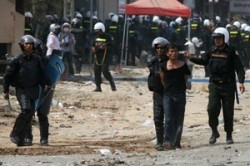 A two-week long strike in Cambodia’s clothing sector came to an end in early January after escalating violence against protestors led to the deaths of at least four people, with more than 30 injured and 23 arrested.

After the government announced a new minimum wage increase from US$80 to US$95 a month, garment workers took to the streets in a nationwide strike to protest for US$160 a month, which workers and labour activists believe is a decent living wage.

The strike came in response to the Labour Advisory Committee’s announcement on 24 December that monthly clothing sector wages would rise from US$80 to US$160 over five years, instead of taking effect immediately. The initial rise for 2014 was set at US$95, but was raised to US$100 after almost a week of demonstrations.

For the full story, see the February 2014 edition of Textiles South East Asia. Not a subscriber? Subscribe HERE