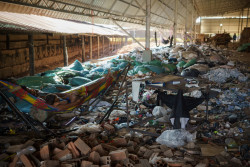 An investigation by Unearthed, part of Greenpeace, has revealed that mixed garment off-cuts from factories are being burned across Cambodia to fuel brick kilns.

It found that tags, labels, footwear, fabric and garment scraps from brands such as Nike, Next, Ralph Lauren, Reebok, Diesel, Michael Kors and Clarks were identified at five different kilns, together with evidence that these were using garment waste in their fires – potentially exposing workers to toxic fumes owing to the presence of dyes and chemicals on garments.

For the full story, see the September 2022 edition of Textiles South East Asia.