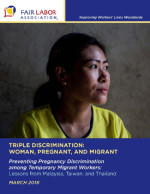 The Fair Labor Association (FLA) has published a report that claims female migrant clothing workers in Asia are routinely subjected to pregnancy testing while in employment and are discriminated against if they are found to be pregnant.

Migrant workers risk being deported if they become pregnant, forcing many to have unwanted abortions or abandon their newborn babies, researchers said.

Based on interviews and statements from workers, the report – Triple Discrimination: Woman, Pregnant and Migrant – looked at cases of migrant workers in Malaysia, Taiwan and Thailand.

In the report, the FLA, a coalition of companies, universities and charities, called for an end to “pregnancy discrimination”, and urged countries to scrap laws that allow or encourage pregnancy tests and the use of contraception as a condition of employment.

The group also encouraged brands, including those who have committed to FLA’s code of conduct, such as Hugo Boss, to support initiatives to protect pregnant workers.

For the full story, see the April 2018 edition of Textiles South East Asia. Not a subscriber? Sign up HERE