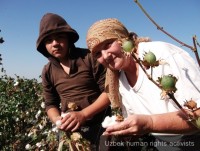 A complaint has been filed against the World Bank’s private lending arm calling for an investigation into forced labour connected to a loan to Indorama Kokand Textile, which operates a cotton processing plant in Uzbekistan.

A victim of forced labour in cotton production and three Uzbek human rights defenders filed the complaint on 30 June against the International Finance Corporation (IFC), according to the Cotton Campaign coalition, the Uzbek-German Forum for Human Rights, International Labor Rights Forum and Human Rights Watch.

The complaint was filed with the Compliance Advisor Ombudsman, an independent accountability unit attached to the IFC. It seeks an investigation into forced labour connected to a US$40m loan to Indorama Kokand Textile.

For the full story, see the August 2016 edition of Textiles Eastern Europe. Not a subscriber? Sign up HERE