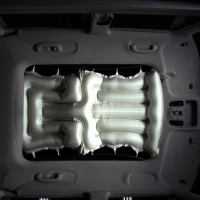 Hyundai Mobis has developed what is claimed to be the world’s first panorama sunroof airbag system.

The safety device is designed to reduce injuries by preventing the passenger from being thrown through the sunroof in a rollover accident.

The panorama sunroof airbag has not previously been applied to mass-produced vehicles, said the company, which began manufacturing airbags in 2002.

For the full story, see the November 2017 edition of MobileTex. Not a subscriber? Sign up HERE