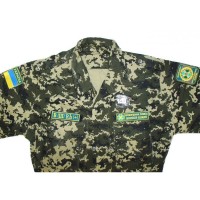 The Ukrainian government is still struggling to provide the necessary uniforms for its military personnel involved in “anti-terrorist operation” in the east of the country.

After opening several criminal cases against the previous suppliers of military uniforms that appeared to be of poor quality, the Ministry of Defence announced that from April this year it will carry out new tenders to find the best suppliers.

For the full story, see the February 2015 edition of Textiles Eastern Europe. Not a subscriber? Sign up HERE