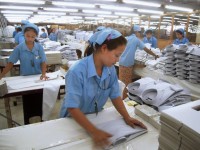 Clothing manufacturers in Myanmar have indicated they will reject a minimum wage proposed by the Burmese government, claiming they cannot afford to pay workers the figure recommended by an expert committee.

Myanmar’s National Minimum Wage Committee had earlier proposed that the country’s minimum wage be set at MMK3,600 (US$3.22) for an eight-hour day.

If approved, the proposed wage, which amounts to less than 50 cents an hour, will be applied across all sectors nationwide, with the exception of certain small and family-owned businesses employing les than 15 people.

Once the wage is approved by the committee and the government, the Minimum Wage Law, approved in early 2013, will take effect immediately. The amount will be assessed and adjusted at least once within its first two years.

However, labour unions have pushed for higher pay, while factory owners in some sectors have said the proposal will make their businesses unsustainable.

For the full story, see the August 2015 edition of Textiles South East Asia. Not a subscriber? Sign up HERE