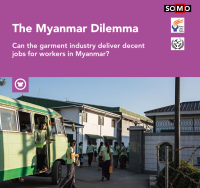 Her comments came as The Myanmar Dilemma Report on the condition of garment factory workers in Myanmar was released in February.

The report was made following investigations conducted by the Centre for Research on Multinational Corporations (SOMO), Action Labor Rights and LRDP on 12 factories and 400 workers.

For the full story, see the April 2017 edition of Textiles South East Asia. Not a subscriber? Sign up HERE