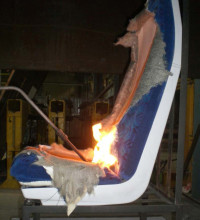 The Railways Interior Expo 2015 held in Prague, Czech Republic, in November, included two conferences; one was dedicated to innovations in train travel and the other to train interiors and largely devoted to the implications of the new EU EN 45545-2 fire standard for train interiors.

This railway interior standard was introduced in 2013 and is presently applicable concurrently with the national UK, French, German, Polish, Italian and Spanish national standards for railway interiors.

From 1 January 2018 only the EU 45545-2 standard will become applicable in the whole of the EU and will replace all present national standards.

Generally, the EU standard is more stringent than the national standards because it introduces two additional fire standards: rate of heat release test – cone calorimeter and a full-scale seat fire test, in addition to an ignitability, flame spread, smoke emission and toxicity test. For floorcoverings a radiant panel test is applicable.

For the full story, see the December 2015 edition of MobileTex. Not a subscriber? Sign up HERE