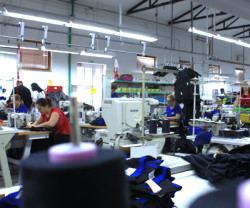 Textile company Mraz of Pale has opened a new production facility in Rogatica, Bosnia and Herzegovina, which will employ 35 workers.

Milorad Jagodic, head of the Rogatica municipality, said that before the Bosnian War (1992–95) the area had a tradition of textile production, with such companies as Rotex and Jasna, and that this tradition was now being revived.

For the full story, see the December 2022 edition of Textiles Eastern Europe.