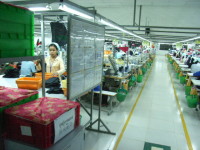 Malaysian-owned Global Apparels, a garment producer in Phnom Penh, Cambodia, has announced that the factory will close by October.

This followed a statement issued on 30 May that cited a lack of orders, which caused the company to operate at a loss, as the primary reason for the closure.

Around 600 employees were made redundant in early June. Factory representatives, union officials and workers have since been negotiating with the Ministry of Labour and Vocational Training over an agreement for compensation.

For the full story, see the July 2016 edition of Textiles South East Asia. Not a subscriber? Sign up HERE