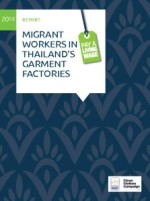 Clean Clothes Campaign and the MAP Foundation have launched an in-depth study into the working conditions of migrants from Myanmar working in the Thai apparel industry.

The new report documents how workers are not only denied the right to collective bargaining and minimum social security, it also shows they are denied the legal minimum wage which is tantamount to wage theft.

Although migrant workers are currently entitled to the minimum wage of THB300 (US$9.14) a day, they are typically paid THB150-180 (US$4.57-5.38) per day, according to interviews carried out by the MAP Foundation for this report. The sum of THB300 also falls short of a living wage, and is insufficient to sustain a worker and her family, the organisations state.

For the full story, see the January 2015 edition of Textiles South East Asia. Not a subscriber? Sign up HERE