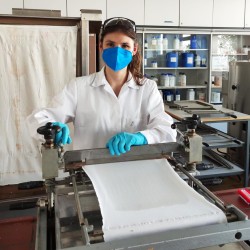 Reusable and biodegradable menstrual underwear (so-called period pants) made with viscose fibres has been developed by a researcher working at Hof University of Applied Sciences.

The development took third place at the Cellulose Fibre Innovation of the Year Award, which was awarded at the International Conference on Cellulose Fibres 2022 held in Cologne, Germany, in February.

The concept was presented by Natalie Wunder (pictured), a former master’s student at the German university, who is now project leader for new business development at German viscose fibre producer Kelheim Fibres.

For the full story, see the March 2022 edition of Medical Textiles.