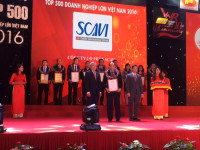 Scavi, one of the largest foreign-invested companies in Vietnam’s fashion sector, has been listed as one of the country’s 500 largest companies in 2016, announced by Vietnam Report in February 2017.

Scavi, which has been growing at an average rate of 25% a year, currently ranks tenth globally in lingerie production outsourcing in terms of revenue. It targets a growth rate of 40% a year up to 2021 and gaining the leading global position in the sector.

A member of the French Corèle International group, Scavi was established in 1988 after the Law on Foreign Investment became effective. Scavi specialises in luxury intimate garments and core intimates, including big sizes, underwear, nightwear, home wear, and swimwear.

For the full story, see the June 2017 edition of Textiles South East Asia. Not a subscriber? Sign up HERE