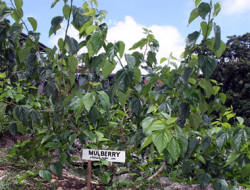 Since 2006, SRDI, which is based at the Don Mariano Memorial State University campus in Banotan, La Union, has created 21.5 ha of techno-demo farms planted with a total of 286,638 mulberry trees in eight provinces: La Union, Ilocos Sur, Ilocos Norte, Abra, Rizal, Zambales, Bulacan, Tanay and Batangas.

One of the major objectives of the Mulberry Research and Development programme is to boost production of heavy-yielding mulberry trees, the leaves of which are the only feed for silkworms that produce cocoons for silk yarn.

For the full story, see the February 2014 edition of Textiles South East Asia. Not a subscriber? Subscribe HERE