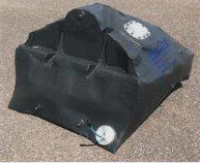 Cortex Hümbelin has been manufacturing technical textiles for Formula 1 for almost 15 years at its manufacturing sites in Ruppersil and Niederlenz, Switzerland.

Established in 1924 as a producer of braided products, the company began making wheel-retaining tethers, which in the event of a crash prevent the wheels from separating from the vehicle and thus endangering drivers, track marshals and spectators.

This was followed by the development of protective fabrics to prevent objects from penetrating into the cooler system. In recent years, Cortex has also been manufacturing seatbelts for drivers.

Now after several years of research and development it has introduced its latest prototype for use in the motor racing field: textile fuel tanks.

For the full story, see the June 2015 edition of MobileTex. Not a subscriber? Sign up HERE