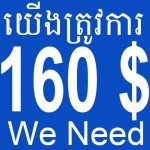 Next year’s minimum monthly wage in Cambodia’s clothing and footwear industries will likely be US$128, after Minister of Labor Ith Sam Heng overruled the Ministry of Labor and Vocational Training’s Labor Advisory Committee (LAC), which comprises representatives from government, factories and trade unions.

Sam Heng met with Prime Minister Hun Sen after the LAC voted by majority in favour of a US$123 monthly minimum wage. An additional US$5 was added “according to the high recommendation from the Prime Minister”, a Labor Ministry statement says.

The directive added that US$123 per month is the set minimum for the workers on probation, while the US$128 minimum applies when workers become full members of staff.

For the full story, see the December 2014 edition of Textiles South East Asia. Not a subscriber? Sign up HERE