Workers ‘under pressure’ in Korean-owned clothing factories in Myanmar 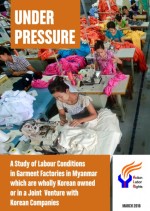 Excessive working hours and overtime, incorrect pay, discrimination and unsafe working conditions were just some of the issues uncovered in several South Korean-owned clothing factories in Myanmar, according to a new publication.

It was based on a survey of 39 factory sites, mostly in industrial zones in the Yangon region and Bago, undertaken in mid-2015 that compared conditions in factories to Myanmar legal requirements.

The survey revealed significant non-compliance on the part of many factories, particularly concerning laws on working hours and overtime, said ALR.

For the full story, see the May 2016 edition of Textiles South East Asia. Not a subscriber? Sign up HERE