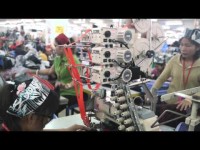 Conditions relating to worker safety in Cambodia’s clothing factories have worsened since 2011, according to the latest assessment from the International Labour Organization’s Better Factories Cambodia.

The report is comprises data from factory monitoring between 1 November and 30 April 2012. A total of 152 garment factories were assessed during this period, of which 51% had been examined five or more times. For 26% of the factories it was a first-time visit, and the remaining 23% had been visited between two and four times.

For the full story, see the August 2013 edition of Textiles South East Asia. Not a subscriber? Subscribe HERE