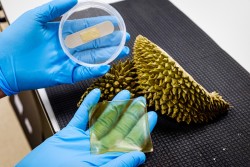 An antibacterial gel bandage has been produced from the discarded husks of the popular durian tropical fruit by food scientists from Nanyang Technological University in Singapore.

Known as the “king of fruits” in Southeast Asia – and also as “stinky durian” since it has a highly pungent odour that has led to it being banned on public transport in certain regions – the durian has a thick husk with spiky thorns that is discarded, while the sweet flesh surrounding the seeds on the inside is considered a delicacy.

For the full story, see the May 2021 edition of Smart Textiles & Wearables.